Creating the following list was much less wrenching than the compiling of my Top Ten Children’s Novels a few months ago. For one thing I had the luxury of making it twice as long, and for another there were more elements to the criteria.


I had to have listened to the audio book, naturally. And although my public library system does an adequate job of feeding my greedy consumption of this medium, I do not by any means have unlimited access all that is available. For instance the Davis County Library system to this date has not seen fit to purchase Clementine in audio form – a failing that cannot be justified.

I also had to have enjoyed the work in its original form. Let’s face it; a weak book cannot be redeemed by the most talented reader.

And finally, the reading must bring to the experience that something extra that was not present as it rattled about in voices in my own head. As someone who spends hours a day reading aloud, I have the deepest respect, not to mention the eye-gouging, hair-pulling, shin-kicking envy, for those that do it with aplomb. 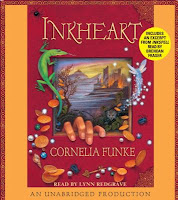 20.  Inkheart by Cornila Funke.  Read by Lynn Redgrave.  The dulcet Ms. Redgrave does such a lovely job reading this first book in Funke page-escaping trilogy, it's a wonder the schizophrenic Brendon Frasier was turned to, to do the others.

19. The Golden Compass by Philip Pullman. Narrated by the author with a full cast of British Actors. For the most part I find full-cast audio books irritating at best, and lobotomizing at worst; but for whatever reason this version is divine. The actress reading Lyra is captivating.

18. Tadpole by Ruth White. Narrated by Kate Forbes. The Appalachian accent brought to this reading is tangible.

17. Maniac McGee by Jerry Spinelli. Narrated by S. Epatha Merkeson of Law and Order fame. There is something about this favorite of mine, being read in the dry but compassionate voice of Merkeson. 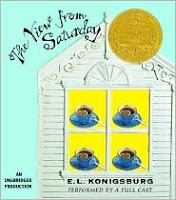 15. Sammy Keyes by Wendelin Van Draanen. Narrated by Tara Sands. The light young voice of this narrator suits to perfection the savvy, middle-school detective in this series. 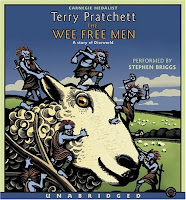 14. Wee Free Men by Terry Prachett. Narrated by Stephen Briggs. The brogue brought to this tale of hard-drinking, hard-talking, blue fairy boys is a giggle a minute.

13. Holes by Louis Sachar. Narrated by Kerry Beyer. It is hard to imagine any telling of this flawless book not working. The narration here kicks the sublime up a level.

12. Bloody Jack: being an account of the curious adventures of Mary “Jacky” Faber, Ship’s Boy by L. A. Meyer. Narrated by Katherine Kellgren. The vocal ability of Ms. Kellgren to take us from the cockneyed streets of 18th century London to the highs seas in the British navy is dizzying delight.

11. Because of Wynn-Dixie by Kate DiCammillo. Narrated by Cherry Jones. Cherry Jones’ expressive, slightly-lispy, voice is so right for India Opel and company.

10. Good Masters, Sweet Ladies by Laura Amy Schiltz. Full cast of narrators. Sure I’d read the book before it won the big award, and sure I was mighty impressed with Schiltz’s skill with words. But hearing it how it was meant to be heard, moved it from a grand award-winner to pure genius.

9. Ramona the Pest by Beverly Cleary. Narrated by Stockard Channing. Not only can Ms. Channing voice regal indignation as the First Lady in The West Wing, but she can voice the same indignation as a five- year-old.

8. The Graveyard Book by Neil Gaiman. Narrated by the author. I’m not sure if a children’s book should sound this sexy, but I will happily take my ghost stories with this kind of verbal velvet.

7. Our Only May Amelia by Jennifer Holm. Read by Emmy Rossum. The young narrator used to tell this tomboy romp brings such a delicious texture to this captivating character.

6. Anne of Green Gables by L. M. Montgomery. Narrated by Barbara Caruso. At first I was put off by the old fashioned feel of the narration but then I realized Caruso was pulling me back in time with her voice to the red roads of P.E.I.

5. Joey Pigza by Jack Gantos. Narrated by the author. It goes to figure that Joey’s papa would be able to give Joey the perfect frenetic pitch.

4. Year Down Yonder by Richard Peck. Narrated by Lois Smith. I don’t know who this Lois Smith is, but in my world she will have closet full of Lane Bryant dresses and a passel of shenanigans up her sleeve that would do Grandma Dowdel proud.

3. Roll of Thunder Hear my Cry by Mildred Taylor. Narrated by Lynne Thigpen. The power and authenticity that Thigpen brings to Taylor’s story of depression era racial issues is breathtaking.

2. Absolutely True Diary of a Part Time Indian by Sherman Alexie. Read by the author. The “Rez” accent is not essential to appreciate this adolescent chronicle of straddling two worlds, but is sure doesn’t hurt.

1. Harry Potter by J. K. Rowling. Narrated by Jim Dale. I know I’m not very original but I can’t deny that I’ve listened to the vocal acrobatics of Jim Dale too many times to put Harry, Hermione, Dobby, and the rest, at the top of the list.
Posted by DaNae at 9:46 PM