The Results of the 2nd Annual Snow Horse Leu-bery 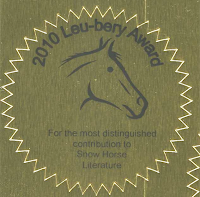 This past week marked the second year in a row an assemblage of well-read students from my school, gathered in the early hours of a January morning. They were eager to view the results of the ALSC awards announcement, and to discover which of the books, they have been cramming to read over the past couple months, came out on top in their own vote. Last year in an attempt to spread my Newbery obsession onto unsuspecting participants, I suggested our gifted teacher developed a literature class for her upper grades around a Mock Newbery. As I explained here she did a wonderful job and further justified my unhealthy pre-occupation.

Disclaimer: No actual professional photographers were inconvenienced in the making of this blog post, which will be abundantly clear.

Around thirty 6th graders were given the task of reading five titles apiece.

And one of the following electives:

The two major obstacles in pulling off this criteria is number one, convincing 6th graders that they can indeed read five books in two months. Many lightweights dropped out early on, leaving a select few worthy of being on the committee. Remember this is coming from someone who has a life-time membership in the dyslexia club. I did sympathise - but really, could they not see the vision of getting to pick their own winners and read a bunch of great books to boot?

The other obstacle was having enough copies of 2009 titles, (most only available in expensive hardback), to pass between the participants. Naturally my meager library budget did not allow me to run out and purchase multiple copies, and sadly our county library does not keep as up on newer titles as would seem prudent. This tricky wicket was circumvented by the existence of our in-house book club, consisting of several of our teachers, other staff, including our charming principal, and myself. As a matter-of-fact the above list was created with an eye to using books we had read throughout the year. In a gracious gesture the book club members lent their personal copies to the cause. Another source of economy was to exploit the offerings of the semi-annual book fair. Scholastic, in their wisdom, carried a couple titles we were able to procure with PTA approved book-fair credit.

By the Friday before the actual announcements were to be made, the student should have read their selected books, completed a visually stimulating project (see below) and voted for their pick. Following Newbery protocol they placed a ranked vote for their top three. First place votes counted for 4 points, second - 3 points and third - 2 points.

The day of our big event did not take place until a couple days after the real awards had been announced. In a misguided decision ALA choose to hold their meeting this year a week earlier than in previous years, which resulted in the award announcements being made on a the MLK holiday, a non-school day. Although a few of the kids cheated and researched the results before showing up for the big reveal, they were dedicated to keeping that information to themselves. With many thanks to the intrepid Betsy Bird of Fuse #8, for getting her bootleg video footage of the event up and running for us to view on the designated morning, we gathered about the library to watch the events unfold. One advantage of watching it at a later date was the ability to zero in on the awards most pertinent to an elementary age student. Those present were told that they should be thrilled that their own library was already in possession of so many award-winning books. 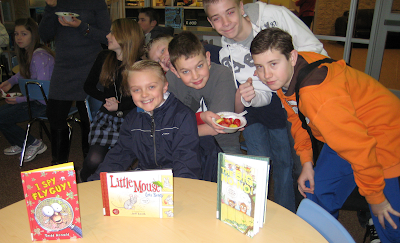 Here we see the excitement over our Gisels

They were indeed thrilled when The Lion & the Mouse took the Caldecott, as Mr. Gene Nelson from this year’s Caldecott Committee, and from our state, had held a condensed Mock Caldecott with them in December. They were early fans of Pinkney’s stunning offering. 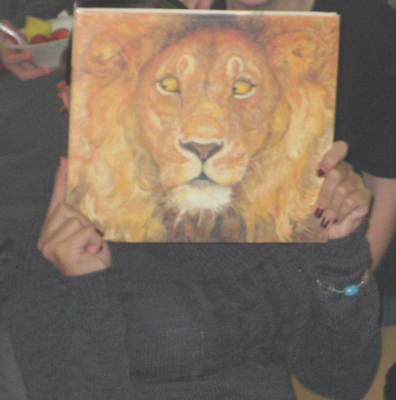 Although donuts were promised a 'bait and switch' was deployed by healthier heads (see our above-mentioned charming principal): 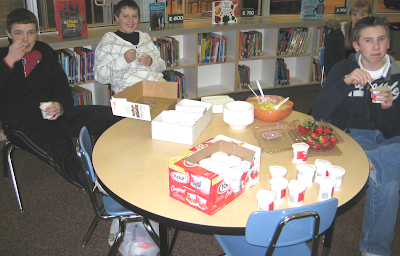 The enthusiastic response when Rebecca Stead's When You Reach Me took Newbery gold:

Once we were finished with the audio-visual portion of our morning, the announcement was made regarding their votes. (Last year, in an attempt to reinforce the knowledge that I work at the most awesome school in the country, the student award for "The Most Distinguished Contribution to Snow Horse Literature" was christened the Leu-bery after yours truly.)

I am now pleased to announce the results of the 2010 SNOW HORSE LEU-BERY: 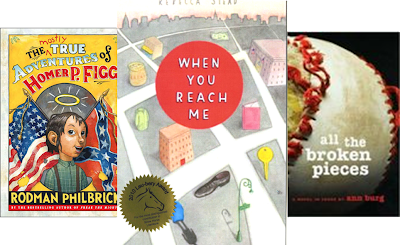 I mentioned before that a visually delightsome project was required to finish the project. Behold the evidence of such in the following photo gallery:

A bit of When You Reach Me: 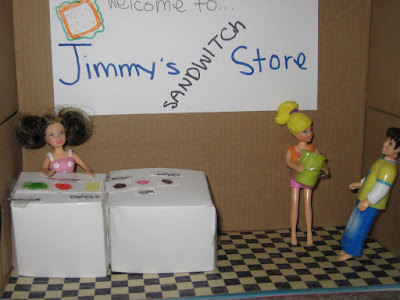 A little flirting over lunch 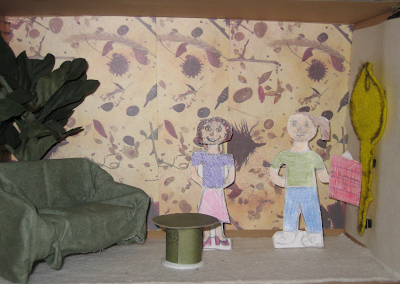 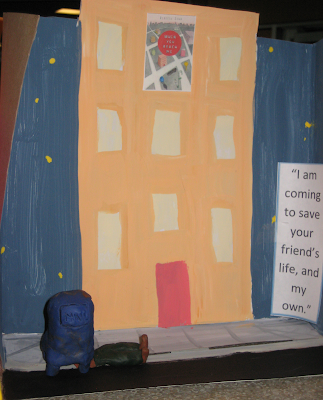 This display has defiantly peaked the curiosity of the students yet to read the book. 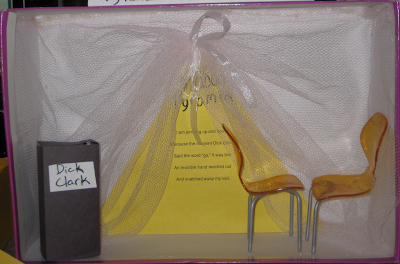 The veil parts at the gameshow 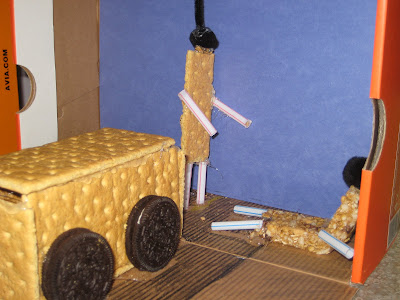 Every plot climax should be immortalized in snack food.

Now some of Homer P. Figg: 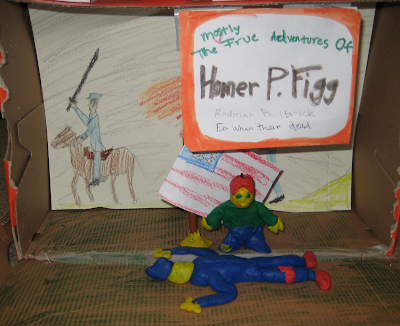 How about All the Broken Pieces as cereal boxes: 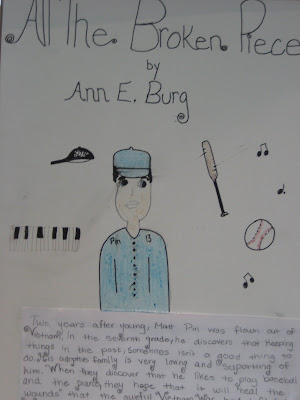 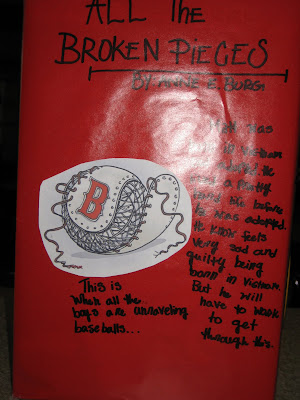 Or maybe your are "Peck"ish over breakfast: 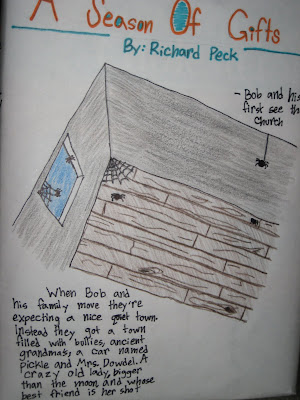 Naturally DiCammillo's The Magicians Elephant more than lent itself to drama: 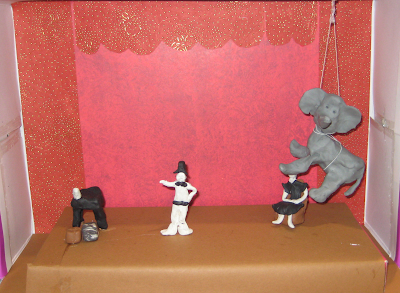 12-year-olds should always be put in charge of marketing campaigns. 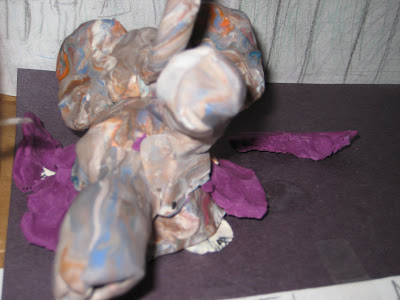 I believe that purple splotch is the unfortunate Madame Bettine LaVaughn
Posted by DaNae at 3:41 PM