#1 Highlight of Trip to Portland

WALKING THROUGH THE WORLD OF BEVERLY CLEARY 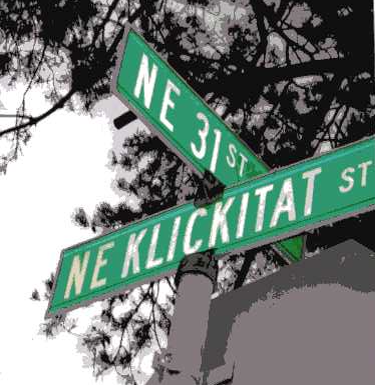 There are certain scenes from my childhood reading that remain indelibly etched in the crevices of my brain. With the smallest provocation they can be recalled clearly and tangibly, overshadowing the mundane moments of my actual childhood. Many, many of those moments can be claimed as a companion to the Klickitat gang - Henry, Beezes, and Ramona. 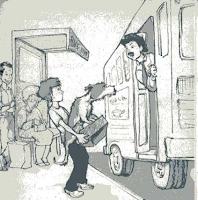 I remember when Henry brought Ribsy home. As awkward as the situation was, I agreed it was worth the trouble he went through to get such a fine and dandy dog. 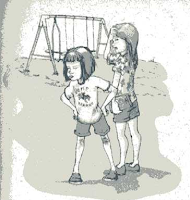 I remember Beezes’ chagrin at being called an embarrassing and blasphemous name by obnoxious boys, and the humiliation of having her little sister rush to her defense. 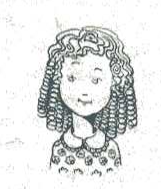 Mostly I lived and suffered with Ramona. We were always a little too loud. We were often misunderstood by adults who seemed to applaud good manners before good intentions. We were never able to stay quite as clean as the other girls. And we never, ever were to have hair that spiraled in tantalizing boing-boing curls.

Klickitat Street and its environs felt so like the streets I rambled about as a grade-schooler, I was thoroughly shocked to find that right in the middle of Portland Oregon they actually existed. A few years ago when my sister first clued me into this astonishing fact it was like finding out I could go to the back of my closet and run into a goatman.

It should be no surprise that when this visit was discussed, a plan was devised to set aside a day to invade the current avenues, shops, parks, schoolyards, and haunts of the famed neighborhood. In search of a fictional past made ever relevant through the magical pen of the Queen of realistic childhood fiction. We were armed with The Beverly Cleary Handbook, which lays out in pictorial accuracy, various locations where scenes from her books took place. As you may have noticed this helpful piece of literature was not titled The Beverly Cleary Stalker’s Handbook. In what I assume was a stab at protecting the current residence of some of the private homes, street names were given but no actual addresses. Never fear, we are very good detectives, and with a crime scene investigator’s ability to scrutinize the growth patterns of landscaping over the ensuing years, we were able to deduce the current location of several of the homes listed. Our other useful tool was a pamphlet produced by the Multnomah County Library system. We picked it up at the Hollywood Library, which would have been the Quimby’s neighborhood library if it had existed at the time Ramona was looking for her steam shovel books. The Beverly Cleary’s Neighborhood pamphlet was dead useful in ferreting out various destinations in our quest to “dork-out” in Kid Lit nostalgia. OK, so the map is really not to scale, but we were intrepid and undaunted. 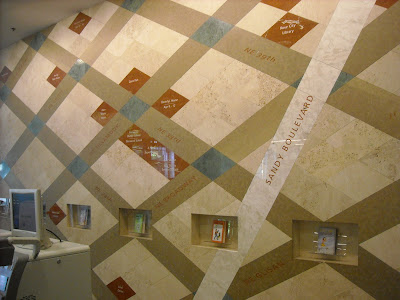 It is an old dictum that a writer should write what she knows. A dictum that was not lost on Mrs. Beverly Cleary. Her fictional children ran about the same streets she had as a child. Want proof? According to the above resources these two houses were former homes of little Beverly. I wonder how often the current residences wake up in the mornings only to find Cleary voyeurs out their window? (If said current residences should happen to stumble across this blatant exploitation of their homes, my humble apologies.) 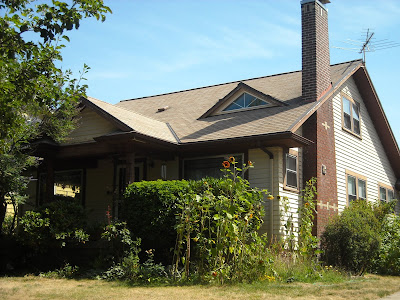 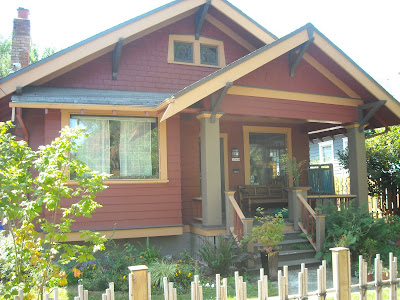 As I mentioned above, the current neighborhood library did not exisist at the time Beezes took Ramona to get her first library card. 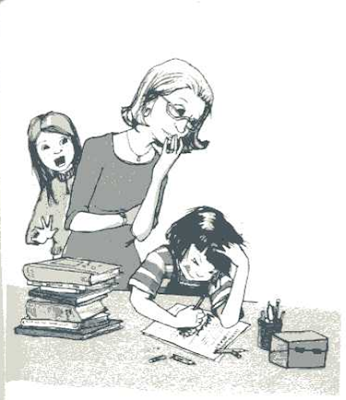 Although you can no longer find a copy of Big Steve the Steam Shovel at the Rose City Library (Glenwood Branch Library), you can get a scrumptious croissant in it's current incarnation. 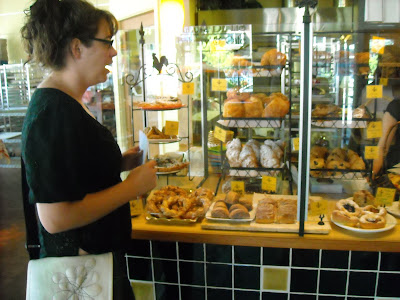 Remember the great night-crawler escapade - when Henry, in order to earn enough money to buy a football, spends long hours into the dark doing his best to empty Grant Street Park’s lawn of worms? 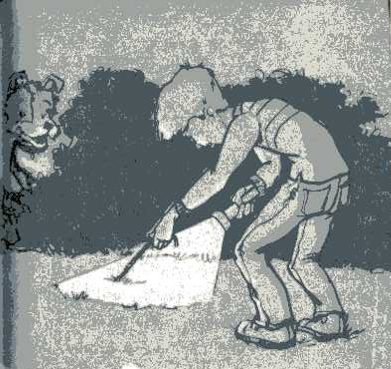 Here is that very park on a hot August day 60 years after Henry first wrangled those squirmy little money-makers. 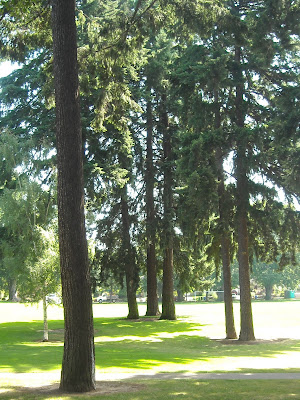 Several years ago, the city’s park department immortalized Mrs. Cleary’s beloved characters in the Beverly Cleary Sculpture Garden, located in the upper corner of Grant Street Park. Ramona and Ribsy and the small fry of Portland will perpetually frolic in the fountains on hot summer days as Henry looks on from a safe dry distance. 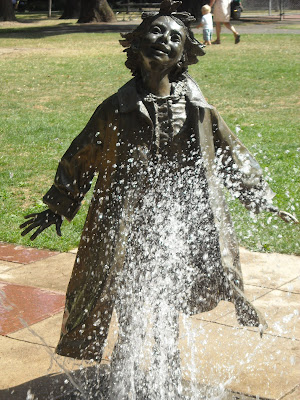 That's what new boots were for - showing off, wading, splashing, stamping (Ramona the Pest) 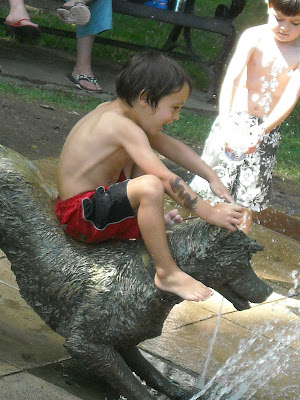 "Jeepers I don't know what this neighborhood would have done without Ribsy," said Beezes (Henry Huggins)

This next shot made me ridiculously happy. 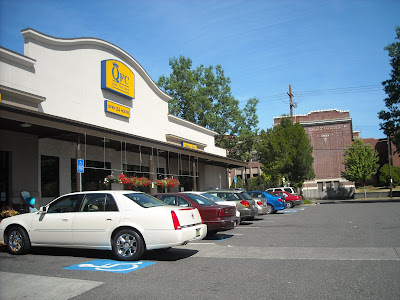 You may wonder why the parking lot of a ubiquitous grocery store would give me chills, and cause little pin-pricks of moisture to sting my eyes? If I were to show you this next picture and explain that this brick building is the former Fernwood School (Glenwood School), currently sporting the name of Beverly Cleary Fernwood Campus - the place where Henry was covered in green paint, saving him from the fate of playing the bekissed Little Boy - the place where Ramona met her dear Miss Biney - the place where Ramona set justice to rights by scrunching Susan’s copycat owl. Now do you understand the significance of the nearby grocery store parking lot? 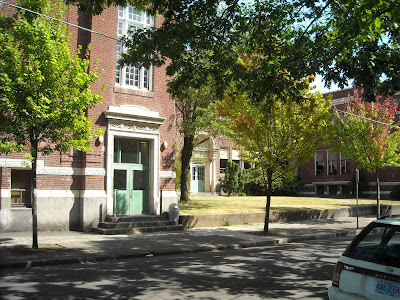 Think back to that very spot, long before the current franchise, or its many predecessors, was in existence. Back when workmen and their big machines were hard at work churning the landscape in preparation to build the new shopping center. Back to the rainy day when Ramona, finally in her shiny red, girl boots, discovered on her way to school the unpaved parking lot void of construction workers, but full of “the best mud, muddiest mud, the most tempting mud Ramona had ever seen.” She was warned not to venture in. Did she heed the warning? No she did not. 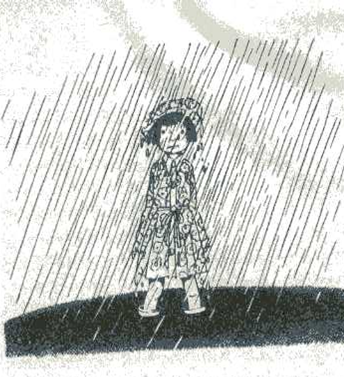 Stuck up to the tops of her glorious new boots, she fantasized on possible means of extraction. 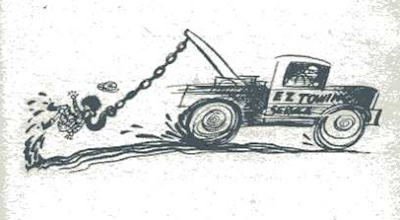 (This is possibly my favorite illustration of all time)
Only to be rescued by a disgruntled crossing guard, one Henry Huggins. Upon being brought back to safety Ramona swears her undying love to her rescuer and promises to marry him. 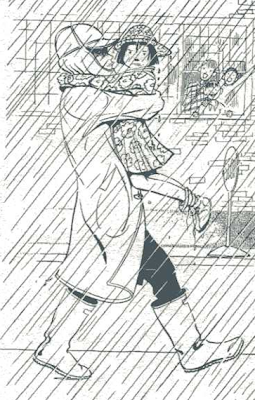 I read this chapter from Ramona the Pest every Valentine’s day to my fourth graders. It never fails to captivate these kids that showed up more than 50 years after Ramona and Henry first showed up on Klickitat Street.

I realize that to many of you the stories of Henry, Ramona and the rest are just that - stories. I, who have now seen tangible proof, have little doubt that somewhere out there Beverly Cleary kids are alive and well. They will always be relevant not only to a middle-aged librarian who may perhaps spend too much time rewriting her own childhood, but to the young readers of today. After-all every child knows that new boots are “not for keeping your feet dry, but to show off.”